A 24-Decade History of Popular Music

One of the greatest experiences of my life.

From murder ballads to speakeasy jazz, Women’s Liberation anthems to Walt Whitman, this is a show 240 years in the making and 24 hours in the telling.

Taylor Mac’s mission is nothing short of extraordinary: to chart a complete social history of a nation through the music that scored its rebellions and revolutions, triumphs and tragedies.

Across four six-hour epics of staggering scale, Mac enlists the aid of over one hundred local and international performers—from acrobats and burlesque artists to choirs and marching bands—to join this fearless quest.

Hailed as a Ring Cycle for the 21st century, this once-in-a-lifetime experience has never been seen outside the US and is co-commissioned by and exclusive to Melbourne Festival. Part celebration and part exorcism, it’s a no-holds-barred extravaganza of music, history, performance and art that will take its place as one of the most spectacular stage events Melbourne has ever witnessed.

Taylor Mac also appears in two other events during the Festival, including the Closing Night Party and a free artist talk →

Learn more about the show before you go. Browse the house program →

The American Revolution from the perspective of the Yankee Doodle Dandy, the early Woman’s Lib movement, an epic battle between drinking songs, early Temperance songs, a dream sequence where you are blindfolded and the heteronormative narrative as colonization.

Walt Whitman and Stephen Foster go head-to-head for the title of Father of the American Song, culminating in the queerest Civil War reenactment in history. Plus a production of The Mikado set on Mars.

A Jewish tenement, a WWI trench, a speakeasy, a depression and a zoot suit riot all make the white people flee the cities.

Bayard Rustin’s March on Washington leads to a queer riot, sexual deviance as revolution, radical lesbians and a community building itself while under siege.

Taylor Mac is the darling of New York's cabaret scene, hailed as its bedazzled shaman, radical angel and searing social critic. Mac’s stellar ascent has been accompanied by a constant stream of accolades, including Guggenheim and Doris Duke awards, Obie and New York Drama Critics Circle special citations and most recently the Kennedy Prize for Drama, whose previous winners include Hamilton.

"A must-see for anyone who wants to see a kinder, gentler society."

This downtown performer is hell bent on making us look at the hidden history of our favorite songs. In platform heels. For 24 hours.

This work was developed with the support of the Park Avenue Armory residency program, MASS MoCa (Massachusetts Museum of Contemporary Art), New York Stage and Film & Vassar’s Powerhouse Theater, SPACE at Ryder Farm, and the 2015 Sundance Institute Theatre Lab at the Sundance Resort with continuing post-lab dramaturgical support through its initiative with the Andrew W. Mellon Foundation.

The World Premiere of the complete A 24-Decade History of Popular Music was presented in its entirety at St. Ann’s Warehouse, Brooklyn NH in a co-presentation with Pomegranate Arts September/October 2016.

A 24-Decade History of Popular Music was made possible with funding by the New England Foundation for the Arts' National Theater Project, with lead funding from The Andrew W. Mellon Foundation.

Each ticket includes all four Chapters.

IF YOU'RE FEELING PECKISH...

Whether it's an entree or an encore, stay nourished this Festival. 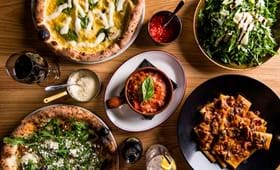 Check out our Festival Feasts

Select & Save Packages are for you

Or, click the X and continue this single event booking.

Some events are excluded and terms and conditions apply.

Or, click BUY TICKETS to proceed with this single event booking.